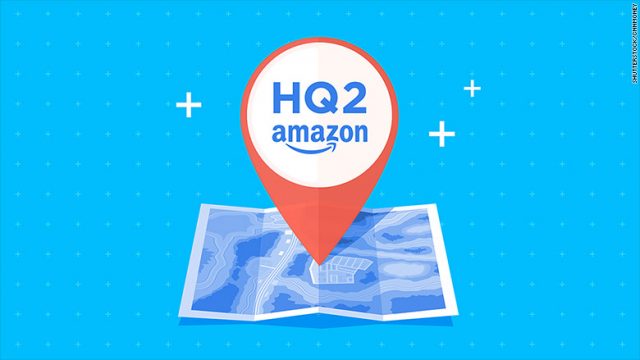 New Yorkers may assume that the Empire State Building lit up in orange on Wednesday night is an early Halloween treat.

But New York City is the latest city vying for the attention of tech giant Amazon.

The deadline to submit a proposal for Amazon’s second headquarters is rapidly approaching, and cities are making last-minute efforts to stand out.

Amazon (AMZN, Tech30) has sent cities into a frenzy since announcing plans to open another headquarters in North America.

Dubbed HQ2, the new facility will cost at least $5 billion to construct and operate, and will create as many as 50,000 jobs. The deadline to submit a proposal is Thursday.

It’s unclear how many cities have submitted proposals so far. Amazon did not immediately respond to a request for comment.

Cities have made splashy and creative efforts to grab the company’s attention. For example, Tuscon, Arizona sent a giant cactus to CEO Jeff Bezos and Stonecrest, Georgia offered to de-annex land and rename it the city of Amazon.

In the last week, more cities have come forward with more out-of-the-box approaches.

Kansas City Mayor Sly James has given five-star reviews to 1,000 random items on Amazon’s website. He also found a way to tie in Kansas City’s strengths in each review. One was for $14.99 wind chimes.

“I’ll tell you, when I’m sitting out in the backyard of my reasonably priced home in a safe neighborhood with great schools and these chimes start to tinkle, it feels like the whole world is singing just for me,” the mayor wrote in the review.

I bought 1,000 products for charity on Amazon and reviewed them all with a little KC love. Read all my reviews at https://t.co/fXuxqnmp3v pic.twitter.com/JBLHyiE51P

“We want to emphasize our innovative approach and this drove that message home,” Mayor James told CNN Tech. “At the bare minimum, more people are going to know more about Kansas City … because of this effort.”

The items purchased for the reviews will be donated to local charities across the city.

On Wednesday night, several major New York City landmarks, like the Empire State Building and One World Trade, will temporarily light up in “Amazon orange” as a show of support for the city’s official bid for the facility.

Other cities are hoping attractive incentive packages will help.

The city of Worcester, Massachusetts will offer Amazon up to $500 million in local property tax breaks spread out over 20 years, officials confirmed to CNN Tech.

And if a new proposed law is passed, New Jersey said it could offer Amazon $5 billion in tax breaks over 20 years. Other representatives for cities would not reveal details of their proposals — like tax incentives — in order to maintain a competitive bid.

But at least one city won’t be submitting a formal proposal for the site: San Antonio, Texas.

“We’ve long been impressed by Amazon and its bold view of the future. Given this, it’s hard to imagine that a forward-looking company like Amazon hasn’t already selected its preferred location,” the letter said. “And if that’s the case, then this public process is, intentionally or not, creating a bidding war amongst states and cities.”

Although San Antonio didn’t make a formal bid, the letter lists several of the city’s positive attributes and adds: “If you choose to join a city of the future, we would love to have you in San Antonio.”

Cities realize they must fix the sorry state of buses