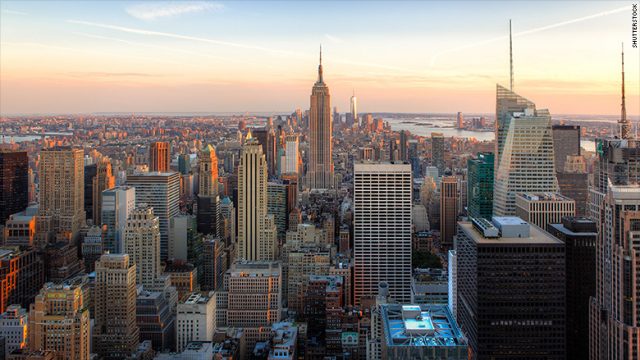 NYC went orange in a bid for Amazon’s next headquarters

New York City is getting serious about prepping its five boroughs for a high-tech future.

The city announced on Thursday a program called NYCx to help the city better prepare for and shape the future.

NYCx will focus on coming innovations such as 5G connectivity, self-driving cars or artificial intelligence, and how they can make the city equitable and sustainable. NYCx will do this through moonshot challenges, which encourage entrepreneurs to tackle the city’s biggest problems. Anyone can apply.

In an unlikely move for a city, New York is also hiring a senior futurist to gather insights on possible cultural, economic and environmental changes ahead. Futurists say that good forecasting can save cities billion of dollars by making prescient policies and decisions that can have an impact for 40 or 50 years.

Some of the world’s best businesspeople, such as Elon Musk and Jeff Bezos, are considered futurists. They use a forward-looking philosophy to chart their companies’ strategies.

New York’s latest efforts are designed to be proactive, rather than reactive.

“The most talented engineers and designers can build things that are trivial but make a lot of money, or they can build things that benefit people’s lives,” Miguel Gamiño, New York City’s chief technology officer, told CNN Tech. “Moonshots are not just us trying to peek around the corner [to see the future], but actually design around the corner.”

Gamiño, a former entrepreneur in the voice-over-IP space, has a background in municipal tech roles in El Paso, Texas, San Francisco and now, New York. He said he’s familiar with how governments often find themselves trying to catch up to new technologies.

Related: 10 cities living in the future

The first moonshot challenge is to transform Governors Island’s 172 acres into a hub for testing broadband connectivity.

The island currently has spotty cell service and Wi-Fi connectivity, according to Michael Samuelian, president of the Trust for Governors Island. Three finalists will be awarded $25,000.

Samuelian would like the island to serve as a testing ground for energy and waste innovations.

“This is like fire insurance,” said Paul Saffo, who chairs the Future Studies program at Singularity University. “It helps the agency make the most of their resources and push things toward desired long-term futures, and protects them against getting caught by surprise.”

Despite safer cars, traffic fatalities are on the rise

The week in stocks ahead