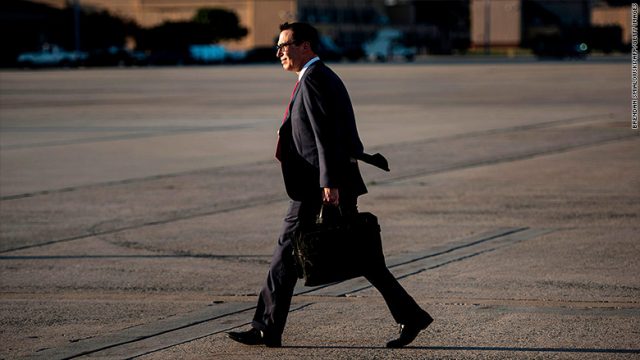 Mnuchin: Plane request was about national security, not personal travel

Seven trips by Treasury Secretary Steven Mnuchin on government planes cost a total of $811,800, according to a report released Thursday by the Treasury Department’s inspector general.

The inspector general, who found no evidence of wrongdoing in Mnuchin’s use of government planes, reviewed nine trips in all — seven that Mnuchin completed, one he withdrew, and one coming later this month.

The IG did find the Trump administration cut corners during the approval process. He said officials must do a better job justifying flights on military jets instead of commercial planes.

The Trump White House had been following established rules that dictate the “rare circumstances” when executive branch officials are allowed to fly on military planes. Any trip must be designated a “White House Support Mission,” meaning the president has said the travel is necessary. Other factors: whether commercial flights are “reasonably available” or if there’s an emergency or national security concern.

Here are the trips that came under the microscope.

1. Trip to London and Berlin

Details: Mnuchin traveled to the G20 conference of finance ministers on the military version of a Boeing 757 plane. During the trip, he also met with the finance ministers from Britain and France, as well as the governor of the Bank of England.

He said he needed a government plane “due to scheduling, logistics, and secure communications needs.”

Details: Mnuchin traveled to the G7 summit of finance ministers on the military version of a Boeing 737 jet.

He said he required a government plane “due to scheduling, logistics, and secure communications needs,” as well as a “potential for developments during travel related to a number of issues.”

Details: Mnuchin traveled to Canada to meet with the country’s finance minister on the military version of a Boeing 737 plane. He was joined on the trip by his wife, Louise Linton.

Mnuchin paid for the cost of her travel — a total of $744.36, according to the inspector general’s office.

The request for a government plane cited “scheduling, logistics, and secure communications needs,” as well as the “potential for developments during travel related to a number of issues.”

Details: Mnuchin took the military version of a Gulfstream 550 to a meeting with Mexico’s finance minister. He also attended the Conference on Prosperity and Security in Central America, which is run by the Department of Homeland Security and the State Department.

The request mentioned scheduling and logistics needs, as well as a “secure call” the secretary had to make while in transit.

The Treasury travel office informed Mnuchin’s assistant that while commercial flights didn’t “accommodate” the secretary’s travel, such a flight would have cost approximately $688 round trip.

Details: Mnuchin took the military version of a Gulfstream V to visit Trump Tower at the request of the president, who wanted to discuss tax reform and tariffs, according to the report.

Transportation Secretary Elaine Chao and Mick Mulvaney, Trump’s budget director, traveled with Mnuchin on the flight there. They did not join him on the return trip because Mnuchin had to conduct “a classified phone discussion with the Secretary of State, and the others lacked the necessary clearances that would have allowed the Secretary to speak openly.”

Details: Mnuchin took the Air Force version of a Gulfstream 550 to Kentucky for an official event with Senate Majority Leader Mitch McConnell. He said he needed a government plane due to “scheduling, logistics, and communications needs.”

This was the trip that kickstarted the inspector general’s review. Mnuchin’s travel habits were flagged by ethics groups after Linton, who traveled with him, posted a much-mocked picture to Instagram that showed her stepping off a government plane.

Records show that Mnuchin reimbursed the cost of Linton’s travel, which was $595.90, according to the inspector general’s office.

Ethics groups had noted that the trip was made around the time of the solar eclipse. The probe found “no indication” that the trip was intentionally made to coincide with that event, and that six different dates in mid-August were initially proposed to McConnell.

8. Trip to the Middle East (scheduled)

Cost: Not yet determined.

Details: Mnuchin has requested a government plane for a trip to the Middle East scheduled for later this month. He’s planning to fly with nine Treasury and two non-Treasury officials, ten Secret Service members and seven members of the media.

Related: Mnuchin asked to use a government jet for his honeymoon

Cost: Request for trip was withdrawn

Details: Mnuchin requested a government plane for his honeymoon trip to Great Britain, France and Italy this past summer.

The request claimed that the secretary was planning to meet with France’s finance minister, and that he needed to “monitor many sensitive issues.” Mnuchin’s office communicated with the State Department about the trip and concluded it would be “most cost-effective” to send him on a government plane to ensure he had “access to secure communications.”

Mnuchin ultimately traveled commercially and on one charter flight. He paid for all those flights out of pocket, according to the report.

Sofia Vergara is the best-paid actress on TV

The Purpose of Control Accounts

It pays to be a scientist in the marijuana industry