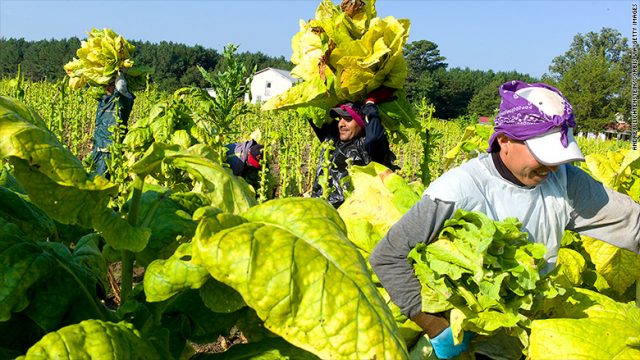 President Trump is endorsing an immigration plan that will hurt job growth and the U.S. economy overall, according to two recent studies.

In a report published Thursday, the University of Pennsylvania’s Wharton School said the immigration plan, dubbed the RAISE Act, would result in 4.6 million lost jobs by the year 2040. It also found that the U.S. economy would be 2% smaller than it would be under the current immigration policy during that time.

Last week, Trump threw his support behind the RAISE Act, a bill crafted by Republican Senators David Perdue and Tom Cotton. The proposal seeks to cut legal immigration to the U.S. by 50% within a decade.

"If you have fewer workers, we will have less economic growth," said Kimberly Burham, a managing director at the Penn Wharton Budget Model, a nonpartisan research team at UPenn.

Economists say the U.S. economy depends on foreign workers to grow the labor force and maintain growth. Since 2000, Baby Boomers have been retiring at a much faster pace than the U.S. job market has been growing, according to data from the Atlanta Federal Reserve and Labor Department.

"Immigrants, especially new immigrants, are highly productive and if we decrease that number, that will harm economic growth in the short and long run," said Burham.

The White House has not yet responded to CNNMoney's request for comment on the study.

The RAISE Act seeks to limit the ability of immigrants to get permanent residency in the form of green cards, restricts immediate family members who can be sponsored for visas and eliminates the international diversity lottery. Instead of replacing those green cards, it would overhaul the employment-based visa system, switching over to a point-based system that places heavy emphasis on higher education, salary and English-language skills.

Another analysis, shared first with CNN, found that blocking low-skilled immigrants from entering or staying in the country could also have vast ramifications for small business creation in the U.S.

Low-skilled immigrants have started millions of small businesses in the U.S., despite having less than a bachelor's degree, according to New American Economy, an advocacy group founded by Michael Bloomberg.

According to the group's analysis of Census Bureau data, more than 2.1 million immigrant entrepreneurs in the U.S. don't have a bachelor's degree. Of those 2.1 million, 445,000 had businesses in construction and more than 100,000 were in landscaping or building services.

Under the RAISE Act's point system, it would be almost impossible for an immigrant with just a high school education to qualify for long-term residency in the U.S.

Related: How to earn 'points' to come to the U.S. under Trump's immigration plan

The group also pointed to past studies that have found that in 2010, one in 10 Americans in the private sector were employed by an immigrant-owned business, that immigrants are twice as likely as U.S.-born Americans to start their own business and that immigrants own more than one-quarter of Main Street businesses in the U.S., including over half of grocery stores and one-third of restaurants.

Supporters of the bill argue that it will raise wages for working Americans and increase the portion of college-educated immigrants who enter the country legally.

"We will build an immigration system that raises working wages, creates jobs, and gives every American a fair shot at creating wealth, whether your family came over on the Mayflower or just took the oath of citizenship," Cotton said when introducing the bill last week.

Despite the White House's support, the bill has little chance of passing in its current form. Many Republicans who support a merit-based system would prefer one that also values low-skilled immigrants, especially lawmakers with heavy agricultural constituencies.

When asked about the bill, Senate Majority Whip John Cornyn called it a conversation starter and a "beginning not the end."

What cybercriminals do with Social Security numbers

TV an eyesore? Samsung wants to change that