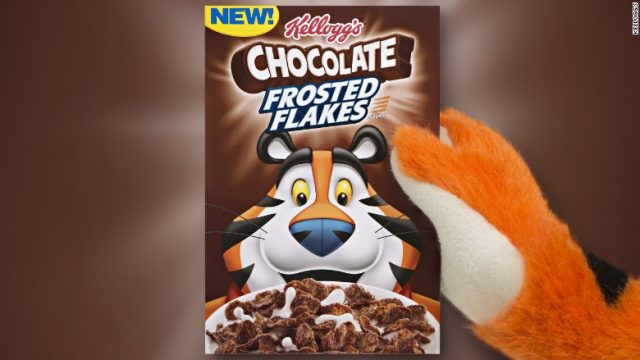 Why Kellogg’s is opening a cereal restaurant in NYC

Kellogg isn’t giving up on sugary cereals just yet.

The cereal company’s latest breakfast invention is Chocolate Frosted Flakes, which will hit shelves across the nation in November.

It might appear gimmicky, but Chocolate Frosted Flakes is part of Kellogg's strategy to stop the bleeding in its core "morning foods" business, which includes staples like Rice Krispies and Pop-Tarts.

As consumers reach for healthier food options, cereal is becoming a harder sell: Kellogg's breakfast sales dropped nearly 7% this summer compared to the same time last year. The company's stock is down more than 17% overall since last October.

Kellogg's breakfast division makes up about 22% of the company's $13 billion in annual sales -- slightly less than its snack division, which makes Keebler, Cheez-Its and Pringles. But cereal remains insanely profitable, basically bankrolling Kellogg. Breakfast foods account for more than 40% of Kellogg's bottom line.

Related: Trix is bringing back artificial flavors after customer complaints

To appease modern consumer appetites, Kellogg's Chocolate Frosted Flakes are made with natural flavors and no preservatives. It's not Kashi, but it's something.

Related: Does anybody eat cereal for breakfast anymore?

"We're seeing consumers either go for health and wellness, or many throw caution the wind and go purely for taste," says Goldman Sachs Analyst Ken Goldman.

Retailers are typically better off committing to one type of consumer, but it makes sense for legacy brands like Kellogg to appeal to as many people as possible, explains Goldman.

To attract the more health-conscious consumer, Kellogg is also entering into the lucrative snack business.

Kellogg hopes its new businesses fare better than Kashi, which it bought in 2000. The company badly mismanaged the healthy cereal brand, overexpanding and failing to ward off an increasing number of competitors. Kashi sales continue to slip.

Cahillane sure has his bowl full.

You Parent Your Way, I’ll Parent Mine!

Will Motion Picture Academy board kick out Weinstein?